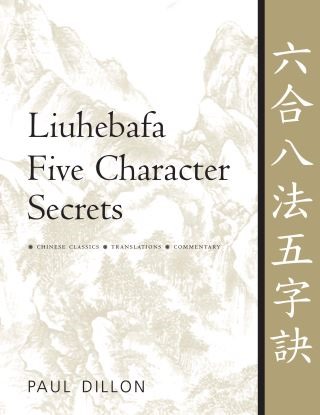 The origins of Liuhebafa (also called Water Boxing) can be traced back to the Daoist sage Chen Tuan (c. 871-989 A.D.). Chen is a mystical figure whose advice and perspective was sought by ancient Chinese Emperors.

Liuhebafa's Five Character Secrets (of Li Dong Feng) are the original precepts of this rare internal martial art known as Huayue Xinyi Liuhebafaquan. Li Dong Feng discovered aged manuscripts of Chen Tuan, during an expedition to Chen's ancient mountain home. Realizing the importance of what he had found, Li remained on Mount Hua until he mastered the material in the manuscripts.

Li returned to his home and then recorded all he had learned on Mount Hua in one hundred and thirty-four verses now known as The Five Character Secrets of Li Dong Feng. This is the only existing treatise on the original principles of Liuhebafa.

This book contains the original Chinese treatise of Li Dong Feng, Pinyin Romanization of the Chinese characters, word for word translation, literal translation, interpretive translation and the author's commentary on the meaning of each verse.

There is more here than meets the eye. It is wise to approach the Secrets with a beginner's mind. Imagine being beckoned to sit by the fire. Lean a little closer to better hear the master as he recites the lines that will open the doors of your mind and heart.

Paul Dillon was born in Montgomery, West Virginia. He attended West Virginia Institute of Technology, majoring in Printing Management. His Chinese studies were at The College of Far Eastern Languages / Yale University.

Paul served in the United States Air Force during the Vietnam era.

His martial arts training began in 1962, primarily in the Japanese styles. Some of the arts he studied included Judo, Shorin Ryu, Kamishin Ryu Kempo, Shin Mugei Iaido, and Aikido. In the later part of the 1960's he began his studies in Fu Jow Pai, Hsing I, Bagua, Yang Style Tai Chi Chuan. Pauls Liuhebafa training was under the instruction of Master Li Chung.

Paul has been teaching Liuhebafa since 1978.