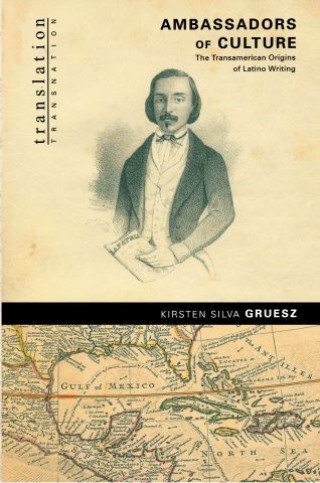 The Transamerican Origins of Latino Writing

This polished literary history argues forcefully that Latinos are not newcomers in the United States by documenting a vast network of Spanish-language cultural activity in the nineteenth century. Juxtaposing poems and essays by both powerful and peripheral writers, Kirsten Silva Gruesz proposes a major revision of the nineteenth-century U.S. canon and its historical contexts.


Drawing on previously unpublished archival materials and building on an innovative interpretation of poetry's cultural role, Ambassadors of Culture brings together scattered writings from the borderlands of California and the Southwest as well as the cosmopolitan exile centers of New York, New Orleans, and San Francisco. It reads these productions in light of broader patterns of relations between the U.S. and Latin America, moving from the fraternal rhetoric of the Monroe Doctrine through the expansionist crisis of 1848 to the proto-imperialist 1880s. It shows how ''ambassadors of culture'' such as Whitman, Longfellow, and Bryant propagated ideas about Latin America and Latinos through their translations, travel writings, and poems. In addition to these well-known figures and their counterparts in the work of nation-building in Cuba, Mexico, and Central and South America, this book also introduces unremembered women writers and local poets writing in both Spanish and English.


In telling the almost forgotten early history of travels and translations between U.S. and Latin American writers, Gruesz shows that Anglo and Latino traditions in the New World were, from the beginning, deeply intertwined and mutually necessary.