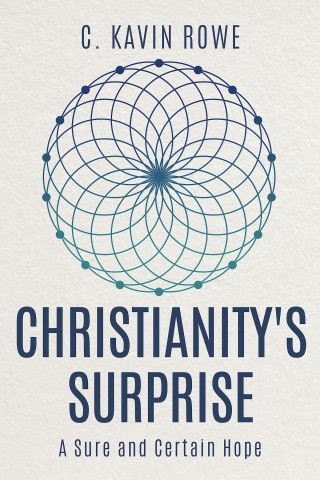 A Sure and Certain Hope

At its beginning Christianity was surprising, powerful, creative, world-shaking.
Today in the West it is many times familiar, common, and
expected, losing its power to surprise and transform. We have developed
societal amnesia and ignorance of what Christianity originally was – and
what it still can be. We need to recover the surprise of Christianity. We
need to ask the same fundamental questions as the early Christians, which
will help us rediscover the surprising power of Christianity in our midst.
Focusing on the surprise of the gospel message takes us into the heart of
what it is to understand Christianity at all, and thus what it is to remember
and relearn the life-giving power and witness that went with being Christian
at the beginning. This remembering and relearning can, in turn, surprise us
all over again and chart a course for our witness today.

C. Kavin Rowe: C. Kavin Rowe is the George Washington Ivey Distinguished Professor of New Testament. His forthcoming book is Christianity's Surprise: A Sure and Certain Hope (Abingdon, 2020). He is the author of three other books: One True Life: the Stoics and Early Christians as Rival Traditions (Yale University Press, 2016), World Upside Down: Reading Acts in the Graeco-Roman Age (Oxford University Press, 2009, paperback 2010), and Early Narrative Christology (de Gruyter, 2006, repr. Baker Academic, 2009). He has published multiple scholarly articles and co-edited The Word Leaps the Gap (Eerdmans, 2008) and Rethinking the Unity and Reception of Luke and Acts (University of South Carolina Press, 2010). He is on the editorial board of several international peer-review journals and has also frequently written articles for faithandleadership.com.
Rowe has been a Fulb