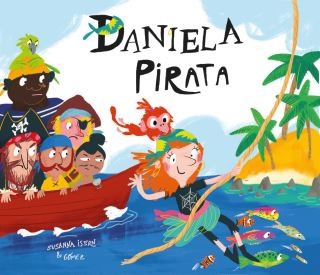 A fun story emerges which differs from the usual pirate story in many satisfying ways. ~Maverick Children's Books

Is being a pirate only for boys? That’s not what Daniela thinks.

She dreams of becoming a pirate on the legendary ship, the Black Croc. She searches and searches through the seven seas, until one day, she finally finds it. But oh dear! These pirates seem to be a little chauvinist. Particularly Captain Choppylobe, who will make Daniela go through difficult challenges to prove her worth as a pirate. Will she make it? Will they let her be part of the crew?

A story about equality and realizing your dreams.

Susanna Isern: Susanna Isern has published over 60 books worldwide, translated into over a dozen languages with 14 available in the US and well-reviewed. She has been awarded the Silver Medal in the Moonbeam Children’s Book Awards 2013 in the USA and her "Bogo the Fox Who Wanted Everything", published by NubeOcho, is a Junior Library Guild Selection. She works as children psychologist and writer.