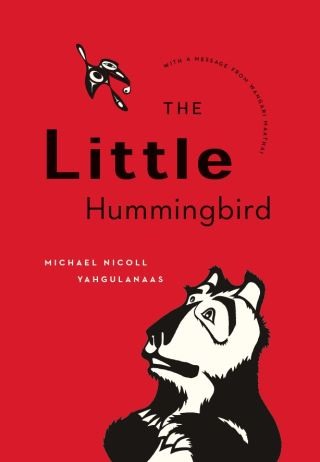 The hummingbird parable, with origins in the Quechuan people of South America, has become a talisman for environmentalists and activists who are committed to making meaningful change in the world. In this simple yet powerful story, the determined hummingbird does everything she can to put out a raging fire that threatens her forest home. The hummingbird—symbol of wisdom and courage—demonstrates that doing something is better than doing nothing at all.

In this revised edition of the bestselling book, Flight of the Hummingbird, the parable is supplemented by an informative fact page about hummingbirds and evocative artwork by internationally renowned artist Michael Nicoll Yahgulanaas. Yahgulanaas’s distinct and lively Haida Manga style complements The Little Hummingbird and this optimistic tale that encourages children to take responsibility for the planet.

Yahgulanaas creates pop-graphic narratives that riff on traditional Haida stories and painting techniques, and developed "Haida Manga"—the distinctive art form for which he is widely known. A trickster-like sense of humour contributes to his work’s appeal. Yahgulanaas’ books include Flight of the Hummingbird, A Tale of Two Shamans, The Last Voyage of the Black Ship, Hachidori, and—most recently—RED, a graphic novel published by Douglas & McIntyre.

Michael Nicoll Yahgulanaas has exhibited in several major galleries, including the Bill Reid Gallery, the McMichael Gallery, the Museum of Anthropology, the Glenbow Museum, and the National Arts Center in Ottawa. His Haida Anime “Flight of the Hummingbird” is featured on YouTube. For the past two decades, besides developing his unique visual style, Yahgulanaas has spent most of his time working with other Haida people to prevent their homeland, Haida Gwaii, from being logged.

Wangari Muta Maathai was born in Nyeri, Kenya, in 1940, the daughter of farmers in the highlands of Mount Kenya. She is the founder of the Green Belt Movement, which, through networks of rural women, has planted over thirty million trees across Kenya since 1977. In 1986 the Movement established a Pan African Green Belt Network, which has taught people from other African countries the Green Belt Movement’s approach to environmental conservation and community building. Several African countries have since started similar successful initiatives.