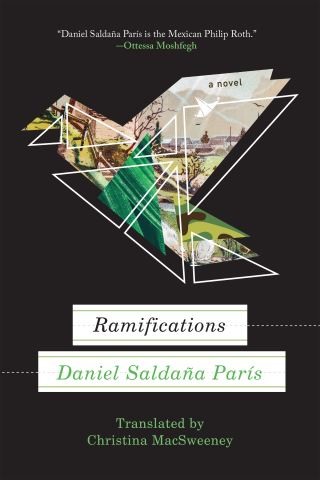 Daniel's first novel Among Strange Victims got a lot of critical attention and bookseller love. Ramifications maintains the same playful use of language, sly sense of humor, and charming digressive tendencies, but with more introspection and emotional depth. Its more straightforward structure will also broaden its appeal to a wider audience. Christina MacSweeney has a strong fan base of her own, and we're glad to be strengthening our translation list through deepening relationships with previously published authors, as well as signing new ones.

Daniel Saldaña París is an essayist, poet, and novelist born in Mexico City. His first novel, Among Strange Victims, published to critical acclaim in 2016, was a finalist for the Best Translated Book Award. He has been a fellow at Union des Écrivaines et des Écrivains Québécois, the Omi International Arts Center, The Banff Centre, and The MacDowell Colony. His work has appeared in BOMB!, Guernica, Literary Hub, Electric Literature, The Guardian, El País, and on KCRW’s Unfictional, among others. In 2017 he was named by the Hay Festival as one of the best Latin-American writers under the age of 40.

Christina MacSweeney was awarded the 2016 Valle Inclán Translation Prize for her translations of Valeria Luiselli's The Story of My Teeth, and her translations of Daniel Saldaña París's novel Among Strange Victims was a finalist in the 2017 Best Translated Book Award. In 2017 she published a translation of Elvira Navarro's A Working Woman, followed in 2018 by Empty Set (Verónica Gerber Bicecci), and Tomb Song and The House of the Pain of Others (Julián Herbert), all of which have received critical acclaim. Her work has also been included in various anthologies of Latina American Literature. Christina also collaborated with Verónica Gerber Bicecci on the bilingual book Palabras migrantes / Migrant Words. Her translations of Bring Me the Head of Quentin Tarantino (Julián Herbert), On Lighthouses, a book-length essay by Jazmina Barrera, and Elvira Navarro’s short story collection Rabbit Island are forthcoming in 2020.