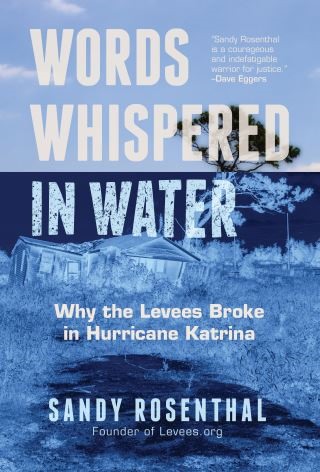 Words Whispered in Water tells the story about how a solitary woman discovered a federal scandal, exposed it, and proceeded to alter the recording of history!

Some more points about Words Whispered in Water:

Readers will learn that they, too, have the power to change the world around them. They will understand that celebrity status is not a required key to success when they discover that Rosenthal was born profoundly deaf, which, in turn, affected her speech and ability to communicate. Still she prevailed.

Additionally, Words Whispered in Water contains a “How To” chapter where readers will learn how to create and lead a grassroots campaign. The chapter is chock full of tools, tips and tricks for driving a mission to fruition.

Sandy Rosenthal is an American civic activist and founder of Levees.Org, an organization dedicated to educating the American public about levee failures and flooding in New Orleans during Hurricane Katrina. Most recently, Rosenthal was awarded Outstanding Social Entrepreneur of the Year from Tulane University for her efforts. She is a founding member of the mentoring program Laurel Eagles. When she’s not advocating for safe levees, she’s practicing with her Mardi Gras parading group, the Divine Revelers of Terpsichore.

She currently lives in New Orleans with her two dogs, Twinkie and Cupcake.