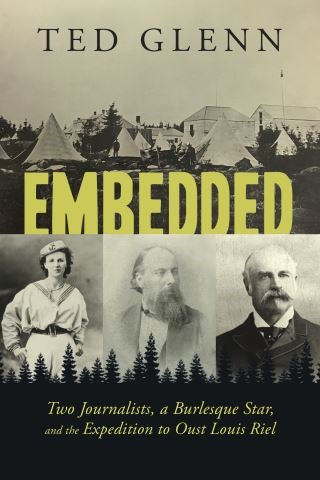 Two Journalists, a Burlesque Star, and the Expedition to Oust Louis Riel

A first-hand chronicle of Wolseley’s expedition to end Riel’s Red River Rebellion by a remarkable trio embedded on the mission.

In the spring of 1870, two reporters set off from Toronto to cover one of the biggest stories in Canadian history: Colonel Garnet Wolseley’s 1870 expedition to Red River. Over the course of six months, the Daily Telegraph’s Robert Cunningham and the Globe’s Molyneux St. John brought readers along as they paddled and portaged alongside the expedition’s 1,100 troops and 400 voyageurs and guides from the shores of Lake Superior to Fort Garry.

But that’s not the whole story. Buried well below the fold was the fact that St. John’s wife — international burlesque star Kate Ranoe — accompanied him and the expedition, and not just as an adventurer. Owing to an accident early on, Ranoe ended up ghostwriting many of St. John’s stories.

Embedded is the remarkable story of two reporters and one extraordinary woman as they journeyed to Red River with Colonel Garnet Wolseley and his expeditionary force.

Ted Glenn is a professor at Humber College and writes about Canadian government and history. He divides his time between Grey County and Toronto.