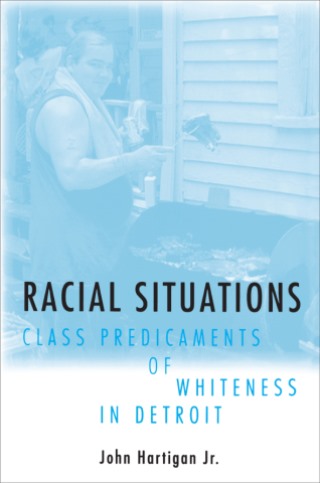 Class Predicaments of Whiteness in Detroit

Racial Situations challenges perspectives on race that rely upon oft-repeated claims that race is culturally constructed and, hence, simply false and distorting. John Hartigan asserts, instead, that we need to explain how race is experienced by people as a daily reality. His starting point is the lives of white people in Detroit. As a distinct minority, whites in this city can rarely assume they are racially unmarked and normative--privileges generally associated with whiteness. Hartigan conveys their attempts to make sense of how race matters in their lives and in Detroit generally. Rather than compiling a generic sampling of white views, Hartigan develops an ethnographic account of whites in three distinct neighborhoods--an inner city, underclass area; an adjacent, debatably gentrifying community; and a working-class neighborhood bordering one of the city's wealthy suburbs. In tracking how racial tensions develop or become defused in each of these sites, Hartigan argues that whites do not articulate their racial identity strictly in relation to a symbolic figure of black Otherness. He demonstrates, instead, that intraracial class distinctions are critical in whites' determinations of when and how race matters.


In each community, the author charts a series of names--"hillbilly," "gentrifier," and "racist"--which whites use to make distinctions among themselves. He shows how these terms function in everyday discourses that reflect the racial consciousness of the communities and establish boundaries of status and privilege among whites in these areas.

John Hartigan Jr.: John Hartigan Jr. is Assistant Professor in the Institute of Anthropology at the University of North Texas. His work on "white trash" and the "white underclass" has been published in a range of journals and edited volumes.