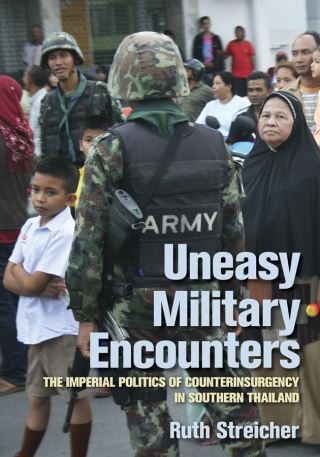 The Imperial Politics of Counterinsurgency in Southern Thailand

Uneasy Military Encounters presents a historically and theoretically grounded political ethnography of the Thai military's counterinsurgency practices in the southern borderland, home to the greater part of the Malay-Muslim minority. Ruth Streicher argues that counterinsurgency practices mark the southern population as the racialized, religious, and gendered other of the Thai, which contributes to producing Thailand as an imperial formation: a state formation based on essentialized difference between the Thai and their others.

Through a genealogical approach, Uneasy Military Encounters addresses broad conceptual questions of imperial politics in a non-Western context: How can we understand imperial policing in a country that was never colonized? How is "Islam" constructed in a state that is officially secular and promotes Buddhist tolerance? What are the (historical) dynamics of imperial patriarchy in a context internationally known for its gender pluralism? The resulting ethnography excavates the imperial politics of concrete encounters between the military and the southern population in the ongoing conflict in southern Thailand.

Ruth Streicher is a postdoctoral researcher at the University of Heidelberg.