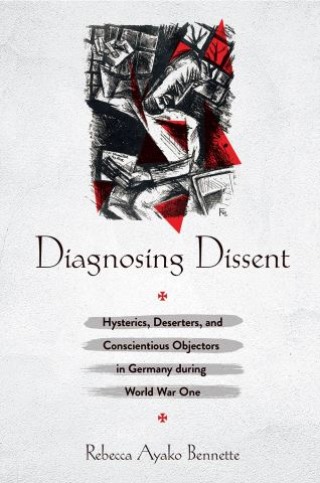 Hysterics, Deserters, and Conscientious Objectors in Germany during World War One

Although physicians during World War I, and scholars since, have addressed the idea of disorders such as shell shock as inchoate flights into sickness by men unwilling to cope with war's privations, they have given little attention to the agency many soldiers actually possessed to express dissent in a system that medicalized it. In Germany, these men were called Kriegszitterer, or "war tremblers," for their telltale symptom of uncontrollable shaking. Based on archival research that constitutes the largest study of psychiatric patient files from 1914 to 1918, Diagnosing Dissent examines the important space that wartime psychiatry provided soldiers expressing objection to the war.

Rebecca Ayako Bennette argues that the treatment of these soldiers was far less dismissive of real ailments and more conducive to individual expression of protest than we have previously thought. In addition, Diagnosing Dissent provides an important reevaluation of German psychiatry during this period. Bennette's argument fundamentally changes how we interpret central issues such as the strength of the German Rechtsstaat and the continuities or discontinuities between the events of World War I and the atrocities committed—often in the name of medicine and sometimes by the same physicians—during World War II.

Rebecca Ayako Bennette is Professor of History at Middlebury College, and is the author of Fighting for the Soul of Germany.