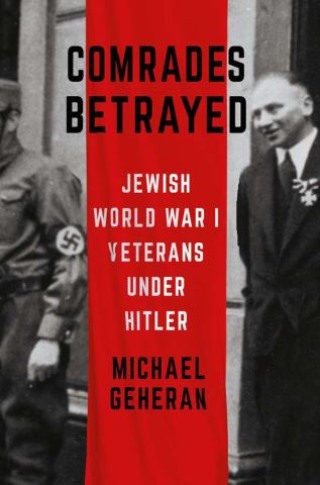 At the end of 1941, six weeks after the mass deportations of Jews from Nazi Germany had begun, Gestapo offices across the Reich received an urgent telex from Adolf Eichmann, decreeing that all war-wounded and decorated Jewish veterans of World War I be exempted from upcoming "evacuations." Why this was so, and how Jewish veterans at least initially were able to avoid the fate of ordinary Jews under the Nazis, is the subject of Comrades Betrayed.

Michael Geheran deftly illuminates how the same values that compelled Jewish soldiers to demonstrate bravery in the front lines in World War I made it impossible for them to accept passively, let alone comprehend, persecution under Hitler. After all, they upheld the ideal of the German fighting man, embraced the fatherland, and cherished the bonds that had developed in military service. Through their diaries and private letters, as well as interviews with eyewitnesses and surviving family members and records from the police, Gestapo, and military, Michael Geheran presents a major challenge to the prevailing view that Jewish veterans were left isolated, neighborless, and having suffered a social death by 1938.

Tracing the path from the trenches of the Great War to the extermination camps of the Third Reich, Geheran exposes a painful dichotomy: while many Jewish former combatants believed that Germany would never betray them, the Holocaust was nonetheless a horrific reality. In chronicling Jewish veterans' appeal to older, traditional notions of comradeship and national belonging, Comrades Betrayed forces reflection on how this group made use of scant opportunities to defy Nazi persecution and, for some, to evade becoming victims of the Final Solution.

Michael Geheran is Assistant Professor of History and Deputy Director of the Center for Holocaust and Genocide Studies at the United States Military Academy at West Point.