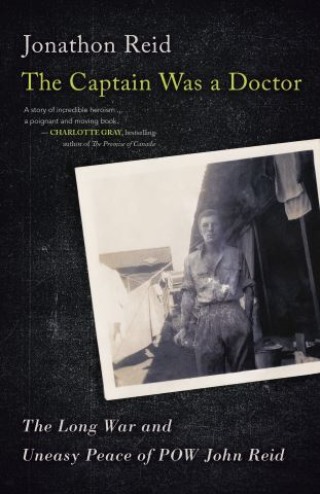 The Captain Was a Doctor

The Long War and Uneasy Peace of POW John Reid

A Canadian medical officer and prisoner of war returns from the Second World War a hero — and a very different man.
In August 1941, John Reid, a young Canadian doctor, volunteered to join the Royal Canadian Army Medical Corps with four friends from medical school. After five weeks of officer training in Ottawa, Reid took an optional two-week course in tropical medicine, a choice which sealed his fate. Assigned to “C” Force, the two Canadian battalions sent to reinforce “semi-tropical” Hong Kong, he was among those captured when the calamitous Battle of Hong Kong ended on Christmas Day.

After a year in Hong Kong prison camps, Reid was chosen as the only officer to accompany 663 Canadian POWs sent to Japan to work as slave labourers. His efforts over the next two and a half years to lead, treat, and protect his men were heroic. He survived the war, but finding a peace of his own took ten tumultuous years, with casualties of a different sort. He would never be the same.

Jonathon Reid has worked as a filmmaker, English teacher, freelance writer, magazine editor, and partner in a magazine publishing firm. He lives in Toronto.