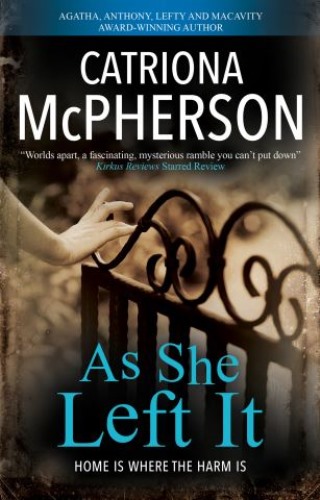 As She Left It

A woman returns to her childhood home to find a community brimming with dark secrets in this award-winning standalone psychological thriller from master of suspense Catriona McPherson.

When she was twelve years old, Opal Jones ran from her alcoholic mother and didn't look back. Now, returning to their pokey Leeds terraced house after her mum's death, Opal feels like she's gone back in time. Nosey Mrs. Pickess is still polishing her windows to a sparkle. Fishbo, Opal's ancient music teacher, still plays trumpet with his band. And much to Opal's delight, her favorite neighbor, Margaret Reid, still keeps an eye on things from her front doorstep.

But tragedy has struck Mote Street in Opal's absence. Ten years ago, Margaret's three-year-old grandson disappeared from her back yard. What really happened to him? Only one thing's certain: someone knows more than they're telling.

Opal vows to uncover the truth for Margaret's sake. But as she investigates, the door she closed on her own dark past begins to open - and the secrets that spill out may be more than she can bear.

Catriona McPherson: Born and raised in Edinburgh, Catriona McPherson left Edinburgh University with a PhD in Linguistics and worked in academia, as well as banking and public libraries, before taking up full-time writing in 2001. For the last ten years she has lived in Northern California with a black cat and a scientist. In 2020 she has been shortlisted for a third Mary Higgins Clark Award, for Strangers at the Gate, and won a Left Coast Crime 2020 Lefty Award for the Best Humorous Mystery for Scot and Soda.