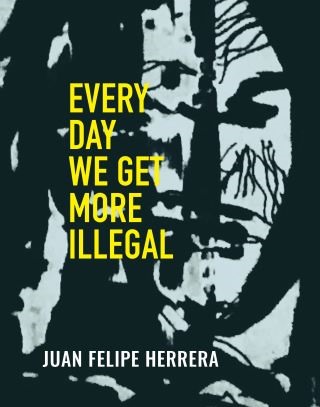 Every Day We Get More Illegal

- Juan Felipe Herrera is one of America’s most prolific living poets. Having published more than a dozen works to much critical acclaim, Herrera also served as the U.S. Poet Laureate from 2015 to 2017. Such success is due much in part to the moving, and deeply timely, nature of his poetry. Herrera’s writing often addresses topics like race relations, undocumented immigration, and cultural heritage—all of which, despite their longstanding existence in the American social fabric, have resurfaced with new charge in today’s hot-button debates.

- Much of this work was written on the road as U.S. Poet Laureate, where Juan Felipe traveled around the country non-stop for two years. These experiences, rare for any person, are explored in this book, aimed at diverse and marginialized communities.

- We published Juan Felipe's last full-length book of poetry, Notes on the Assemblage, in 2015 and it was named a Book of Year in the New Yorker, the Washington Post, Library Journal, NPR Books, and BuzzFeed Books, and was praised in the New York Times, Los Angeles Times, Boston Globe, BBC, and many more. We expect this book, his long-awaited follow-up, to get similar attention.

- We expect Juan Felipe to tour extensively once again for this book, and he always attracts a large audience wherever he goes. We plan to arrange large-scale events.

Juan Felipe Herrera was the 21st U.S. Poet Laureate from 2015-2017, the first Latino to receive this honor. The son of migrant farm workers, he was educated at UCLA and Stanford University, and received his MFA from the University of Iowa Writers' Workshop. His numerous poetry collections include Notes on the Assemblage (2015), 187 Reasons Mexicanos Can't Cross the Border: Undocuments 1971-2007 (2007), Half of the World in Light: New and Selected Poems (2008), and Border-Crosser with a Lamborghini Dream (1999). Notes on the Assemblage was named a Best Book of the Year by The New Yorker, The Washington Post, Library Journal, NPR, and BuzzFeed. In addition to publishing more than a dozen collections of poetry, Herrera has written short stories, young adult novels, and children's literature.

In 2012, Herrera was named California’s poet laureate. He has won the Hungry Mind Award of Distinction, the Focal Award, two Latino Hall of Fame Poetry Awards, and a PEN West Poetry Award. In April 2016, Herrera received the Robert Kirsch Award for lifetime achievement from the Los Angeles Times. His other honors include the UC Berkeley Regent’s Fellowship as well as fellowships from the National Endowment for the Arts, the Bread Loaf Writers’ Conference, and the Stanford Chicano Fellows. He has also received several grants from the California Arts Council.

Herrera is also a performance artist and activist on behalf of migrant and indigenous communities and at-risk youth. His creative work often crosses genres, including poetry, opera, and dance theater. His children’s book, The Upside Down Boy (2000), was adapted into a musical. His books for young people have won several awards, including Calling the Doves (2001), winner of the Ezra Jack Keats Award, and CrashBoomLove (1999), a novel-in-verse for young adults, which won the Americas Award. His poetry collectionHalf of the World in Light was a finalist for the National Book Critics Circle prize in 2009. Herrera lives in Fresno, CA.