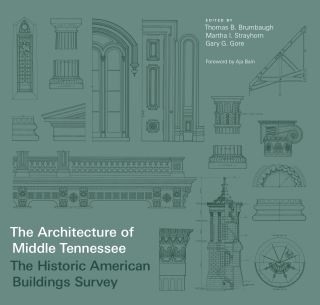 First published in 1974, Architecture of Middle Tennessee quickly became a record of some of the region's most important and most endangered buildings. Based primarily upon photographs, measured drawings, and historical and architectural information assembled by the Historic American Buildings Survey of the National Park Service in 1970 and 1971, the book was conceived of as a record of buildings preservationists assumed would soon be lost. Remarkably, though, nearly half a century later, most of the buildings featured in the book are still standing.

Vanderbilt staffers discovered a treasure trove of photos and diagrams from the HABS survey that did not make the original edition in the Press archives. This new, expanded edition contains all the original text and images from the first volume, plus many of the forgotten archived materials collected by HABS in the 1970s.

In her new introduction to this reissue, Aja Bain discusses why these buildings were saved and wonders about what lessons preservationists can learn now about how to preserve a wider swath of our shared history.