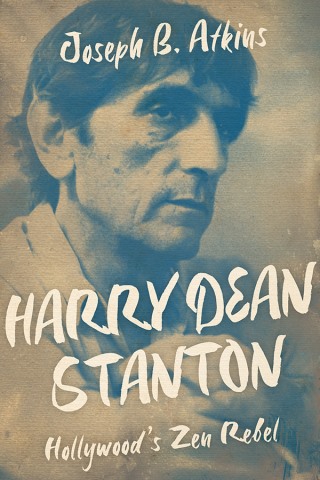 Harry Dean Stanton (1926--2017) got his start in Hollywood in TV productions such as Zane Grey Theater and Gunsmoke. After a series of minor parts in forgettable westerns, he gradually began to get film roles that showcased his laid-back acting style, appearing in Cool Hand Luke (1967), Kelly's Heroes (1970), The Godfather: Part II (1974), and Alien (1979). He became a headliner in the eighties -- starring in Wim Wenders's moving Paris, Texas (1984) and Alex Cox's Repo Man (1984) -- but it was his extraordinary skill as a character actor that established him as a revered cult figure and kept him in demand throughout his career.

Joseph B. Atkins unwinds Stanton's enigmatic persona in the first biography of the man Vanity Fair memorialized as "the philosopher poet of character acting." He sheds light on Stanton's early life in West Irvine, Kentucky, exploring his difficult relationship with his Baptist parents, his service in the Navy, and the events that inspired him to drop out of college and pursue acting. Atkins also chronicles Stanton's early years in California, describing how he honed his craft at the renowned Pasadena Playhouse before breaking into television and movies.

In addition to examining the actor's acclaimed body of work, Atkins also explores Harry Dean Stanton as a Hollywood legend, following his years rooming with Jack Nicholson, partying with David Crosby and Mama Cass, jogging with Bob Dylan, and playing poker with John Huston. "HD Stanton" was scratched onto the wall of a jail cell in Easy Rider (1969) and painted on an exterior concrete wall in Drive, He Said (1971). Critic Roger Ebert so admired the actor that he suggested the "Stanton-Walsh Rule," which states that "no movie featuring either Harry Dean Stanton or M. Emmet Walsh in a supporting role can be altogether bad."

Harry Dean Stanton is often remembered for his crowd-pleasing roles in movies like Pretty in Pink (1986) or Escape from New York (1981), but this impassioned biography illuminates the entirety of his incredible sixty-year career. Drawing on interviews with the actor's friends, family, and colleagues, this much-needed book offers an unprecedented look at a beloved figure.

Joseph B. Atkins: Joseph B. Atkins is a veteran newspaper and magazine writer whose articles have appeared in USA Today, the Baltimore Sun, Oxford American, and In These Times. He is also the author of Covering for the Bosses: Labor and the Southern Press.