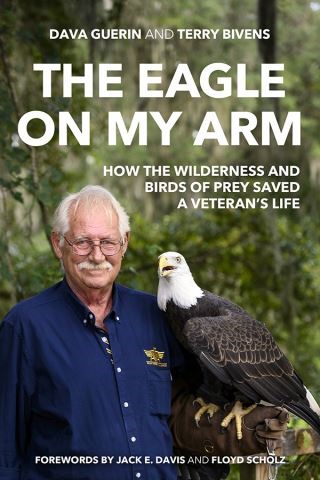 The Eagle on My Arm

How the Wilderness and Birds of Prey Saved a Veteran's Life

In October 1967, eighteen-year-old Patrick Bradley enlisted in the US Army and was later deployed to Vietnam to map mobile POW camps to determine a pattern for rescuing prisoners. Combat left him physically and psychologically wounded, as it does many veterans, and Bradley struggled to adjust when he returned home. He seemed destined for military prison after an altercation in which he broke a superior officer's jaw, but his life changed forever when a psychiatrist recommended a unique path for healing.

Thanks to a program sponsored by the Canadian government, Bradley traveled to Canada to study bald eagles and document their behavior. He found himself recovering while living alone in the wild with minimal supplies or human contact. At the same time, his work was paving the way for groundbreaking research, including the discovery of a link between the use of the pesticide DDT and a decrease in southern bald eagle populations. Later, he forged a successful career training and managing wild animals and committed himself to helping other wounded warriors by cofounding the Avian Veteran Alliance, a nonprofit that pairs veterans suffering from PTSD and physical injuries with injured birds of prey.

The Eagle on My Arm tells Bradley's inspirational story for the first time. This moving account reveals how a soldier became a dedicated healer, using his years of study and solitude to face his demons and turn his pain into a lifelong passion for helping others.

Dava Guerin: Dava Guerin is the author or coauthor of six books, including Rebuilding Sergeant Peck, Vets and Pets, and Unbreakable Bonds. She is a communications consultant and freelance writer and previously served as communications director for the US Association of Former Members of Congress in Washington, D.C. She is an active supporter of Barbara Bush's Foundation for Family Literacy and the Gary Sinise Foundation. She lives in Sarasota, Florida.|||Terry Bivens (1946--2019) was an award-winning journalist, highly ranked Wall Street analyst, and coauthor of Rebuilding Sergeant Peck. His work has appeared in the New York Times, Business Week, and the Philadelphia Inquirer, and his 1991 series for the Philadelphia Inquirer was nominated for a Pulitzer Prize.