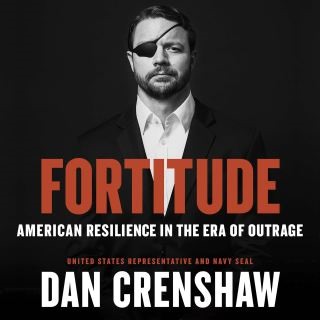 American Resilience in the Era of Outrage

Jordan Peterson's Twelve Rules for Life meets Jocko Willink and Leif Babin's Extreme Ownership in this tough-love leadership book from a Navy SEAL and rising star in Republican politics.
In 2012, on his third tour of duty, an improvised explosive device left Dan Crenshaw's right eye destroyed and his left blinded. Only through the careful hand of his surgeons, and what doctors called a miracle, did Crenshaw's left eye recover partial vision. And yet, he persevered, completing two more deployments. Why? There are certain stories we tell ourselves about the hardships we face -- we can become paralyzed by adversity or we can adapt and overcome. We can be fragile or we can find our fortitude. Crenshaw delivers a set of lessons to help you do just that.

Most people's everyday challenges aren't as extreme as surviving combat, and yet our society is more fragile than ever: exploding with outrage, drowning in microaggressions, and devolving into divisive mob politics. The American spirit -- long characterized by grit and fortitude -- is unraveling. We must fix it.

That's exactly what Crenshaw accomplishes with FORTITUDE. This book isn't about the problem, it's about the solution. And that solution begins with each and every one of us. We must all lighten up, toughen up, and begin treating our fellow Americans with respect and grace.

FORTITUDE is a no-nonsense advice book for finding the strength to deal with everything from menial daily frustrations to truly difficult challenges. More than that, it is a roadmap for a more resilient American culture. With meditations on perseverance, failure, and finding much-needed heroes, the book is the antidote for a prevailing "safety culture" of trigger warnings and safe spaces. Interspersed with lessons from history and psychology is Crenshaw's own story of how an average American kid from the Houston suburbs went from war zones to the halls of Congress -- and managed to navigate his path with a sense of humor and an even greater sense that, no matter what anyone else around us says or does, we are in control of our own destiny.

Dan Crenshaw: Dan Crenshaw served as a Navy SEAL for a decade, achieving the rank of Lieutenant Commander. After being wounded in Helmand Province in 2012, he lost his right eye and required surgery to save the vision in his left. He earned two Bronze Star Medals, one with Valor, the Purple Heart, and the Navy Commendation Medal with Valor. Retiring from the military in 2016, Crenshaw earned a Master of Public Administration from Harvard University's Kennedy School of Government in 2017. He was elected to the United States House of Representatives in November 2018, where he represents the Second Congressional District of Texas. He lives with his wife, Tara, and two dogs, Joey and Luna, in Houston.