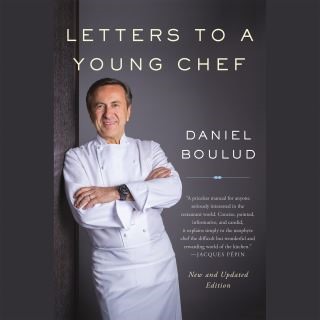 Letters to a Young Chef

From the reinvention of French food through the fine dining revolution in America, Daniel Boulud has been a witness to and a creator of today's food culture. A modern improviser with a classical foundation (a little rock 'n' roll and a lot of Mozart, he'd say), he speaks with the authority that comes from a lifetime of preparing, presenting, and thinking about food-an ancient calling with universal resonance. In Letters to a Young Chef, Boulud speaks not only of how to make a career as a chef in today's world, but also of why one should want to do so in the first place. As he himself puts it, it is "a tasty life." The love of food and the obsession with flavors, ingredients, and techniques are the chef's source of strength, helping the young chef to survive and flourish during the long years of apprenticeship and their necessary sacrifices. Part memoir, part advice book, part cookbook, part reverie, this delicious new book will delight and enlighten chefs of all kinds, from passionate amateurs to serious professionals.

Daniel Boulud: Daniel Boulud was born in France in 1955 and trained under renowned chefs Roger Verge, Georges Blanc, and Michel Guerard. He moved to the United States, where he served as Executive Chef at Le Cirque in New York. In 1993 he opened Daniel, Zagat's top-rated New York restaurant for two years running, followed by Café Boulud and DB Moderne. Among numerous other awards, he has been named "Chef of the Year" by Bon Appétit, and has received Gourmet's Top Table award. He lives in New York City.