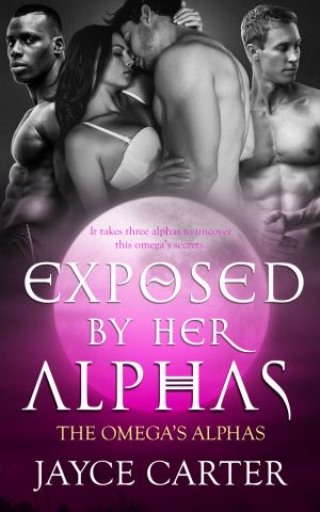 Exposed by Her Alphas

It takes three alphas to uncover this omega's secrets.

Mia's three alpha bosses are protective, sexy and entirely off-limits. Even if she could get past their shameless womanizing ways, or the fact she isn't their type at all, she's spent the past six years keeping a secret she has no intention of letting them discover.

When Hart, Shepard and Dax hired Mia, they never expected her to become such an integral part of their lives. But with a dangerous man targeting them, they have no choice but to lie low with the woman who is more important to them than she should be.

As the four are trapped together in a small cabin, the boundaries they've set to keep things simple start to crumble. The danger that drove them away lies in wait back home, but the biggest threat of all might be the risk to their hearts...

Jayce Carter: Jayce Carter lives in Southern California with her husband and two spawns. She originally wanted to take over the world but realized that would require wearing pants. This led her to choosing writing, a completely pants-free occupation. She has a fear of heights yet rock climbs for fun and enjoys making up excuses for not going out and socializing.