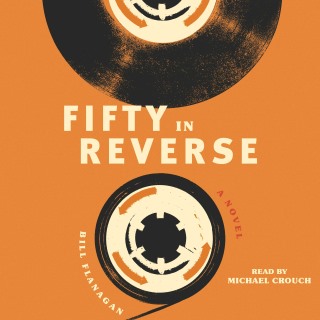 From TV personality and radio host Bill Flanagan comes a highly entertaining time-traveling adventure novel about how the past never gives up its hold on the present and how even sixty-five-year-olds are still kids at heart.

If you had the chance to live your life over again, knowing everything that you know now, would you take it? Would you still take it if it meant losing everything you have today? Would a second chance to correct every mistake and missed opportunity be worth giving up the world you know and the life you have built? In Fifty in Reverse, fifteen-year-old Peter Wyatt does just that.

In the spring of 1970, Harvard psychologist Terry Canyon is introduced to Peter, a quiet kid from a wealthy family who has been suspended from ninth grade for stripping off his clothes in Algebra class. When Terry asks Peter why he did it, the boy explains that he was trying to “shock myself awake.” It turns out that Peter believes he is a sixty-five-year-old man who went to sleep in his home in New York in the year 2020 and woke up in his childhood bedroom fifty years earlier.

Hilariously depicting Peter’s attempts to fit in as a fifteen-year-old in 1970 and to cope with the tedium, foolishness, and sexual temptations of high school as he tries to retain the sense of himself as a sixty-five-year-old man, Fifty in Reverse is a thought-provoking and enlightening novel about second chances and appreciating the life you have today.

Bill Flanagan: Bill Flanagan is an American author, television producer and radio host. He wrote the novels A&R, New Bedlam, and Evening’s Empire, the nonfiction books Written in My Soul and U2 at the End of the World, and the humor collection Last of the Moe Haircuts. Flanagan hosts the Sirius XM radio shows Northern Songs and Flanagan’s Wake and contributes essays to CBS Sunday Morning. He created and produced the TV series Storytellers and Crossroads and has worked on series and specials for NBC, ABC, HBO, MTV, Nickelodeon, PBS, the Sundance Channel, and Showtime. Flanagan has written for Spy Magazine, Rolling Stone, Vanity Fair, Esquire, GQ, Air Mail, Men’s Journal, and The New York Times. He wrote the 2020 film Jimmy Carter: Rock and Roll President.