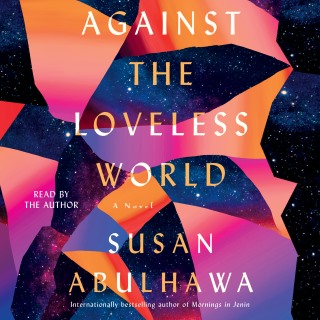 Against the Loveless World

“Susan Abulhawa possesses the heart of a warrior; she looks into the darkest crevices of lives, conflicts, horrendous injustices, and dares to shine light that can illuminate hidden worlds for us.” —Alice Walker, Pulitzer Prize–winning author

In this “beautiful...urgent” novel (The New York Times), Nahr, a young Palestinian woman, fights for a better life for her family as she travels as a refugee throughout the Middle East.

As Nahr sits, locked away in solitary confinement, she spends her days reflecting on the dramatic events that landed her in prison in a country she barely knows. Born in Kuwait in the 70s to Palestinian refugees, she dreamed of falling in love with the perfect man, raising children, and possibly opening her own beauty salon. Instead, the man she thinks she loves jilts her after a brief marriage, her family teeters on the brink of poverty, she’s forced to prostitute herself, and the US invasion of Iraq makes her a refugee, as her parents had been. After trekking through another temporary home in Jordan, she lands in Palestine, where she finally makes a home, falls in love, and her destiny unfolds under Israeli occupation. Nahr’s subversive humor and moral ambiguity will resonate with fans of My Sister, The Serial Killer, and her dark, contemporary struggle places her as the perfect sister to Carmen Maria Machado’s Her Body and Other Parties.

Written with Susan Abulhawa’s distinctive “richly detailed, beautiful, and resonant” (Publishers Weekly) prose, this powerful novel presents a searing, darkly funny, and wholly unique portrait of a Palestinian woman who refuses to be a victim.

Susan Abulhawa: Susan Abulhawa is a Palestinian-American writer and political activist. She is the author of Mornings in Jenin—translated into thirty languages—and The Blue Between Sky and Water. Born to refugees of the Six Day War of 1967, she moved to the United States as a teenager, graduated in biomedical science, and established a career in medical science. In July 2001, Abulhawa founded Playgrounds for Palestine, a non-governmental children’s organization dedicated to upholding the Right to Play for Palestinian children. She lives in Pennsylvania.