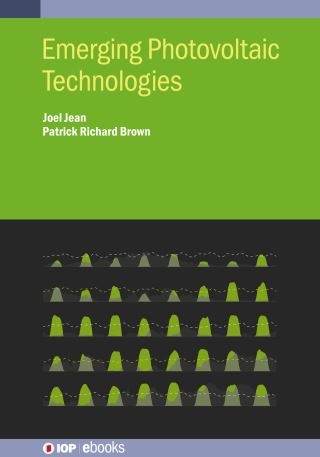 Solar photovoltaics (PV) is the fastest-growing energy technology in the world today and an important tool for mitigating climate change. Crystalline silicon PV modules are now affordable, efficient, reliable, and dominant in the global market. So why do researchers and entrepreneurs continue to pursue new PV technologies? This book explores how market forces expose opportunities for new solar technologies. The authors explain how two emerging thin-film PV technologies – metal halide perovskites and colloidal quantum dots – can benefit from rapid scalability, reduced manufacturing and installation costs, and new modes of deployment. This book is targeted at students, early-career researchers, and industry newcomers seeking to maximize their impact in the field of emerging thin-film solar photovoltaics.

Joel Jean: Joel Jean is a co-founder and CEO of Swift Solar, a U.S. startup developing high-efficiency, lightweight, and flexible perovskite photovoltaics. Joel previously served as the founding executive director of the Tata-MIT GridEdge Solar research program, focusing on scale-up of new solar photovoltaic technologies for India and other developing countries. As a researcher and NSF Fellow at MIT, he developed ultra-lightweight and flexible solar cells that were recognized by the 2017 Katerva Award, and he was named a Forbes 30 Under 30 Fellow in Energy. He co-authored the MIT Future of Solar Energy Study and has worked extensively on emerging PV materials and devices, techno-economic analysis, and energy and climate policy. Joel holds a PhD and SM in electrical engineering from MIT and a BS with distinction from Stanford University.|||Patrick Brown is a postdoctoral researcher at the MIT Energy Initiative. His research focuses on quantifying the near-term competitiveness of photovoltaics, wind, and energy storage across the U.S. electricity system and on technical strategies for integrating high levels of renewable energy into electric power systems. He completed his PhD in physics at MIT, where his thesis research explored the use of colloidal nanocrystals as light-absorbing active materials in thin film solar cells, and his BS in physics and chemistry from the University of Notre Dame. He was a co-author of the MIT Future of Solar Energy study and received a graduate certificate in science, technology, and policy for work on the implications of technological advancement in solar and wind technologies for international climate policy.