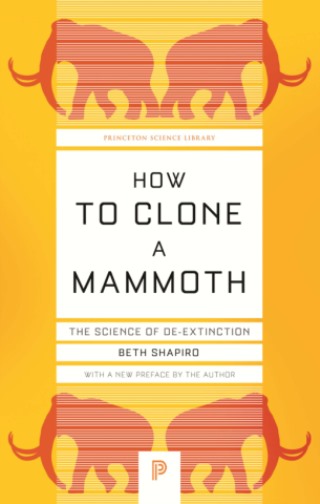 How to Clone a Mammoth

The Science of De-Extinction

An insider's view on bringing extinct species back to life

Could extinct species, like mammoths and passenger pigeons, be brought back to life? In How to Clone a Mammoth, Beth Shapiro, an evolutionary biologist and pioneer in ancient DNA research, addresses this intriguing question by walking readers through the astonishing and controversial process of de-extinction. From deciding which species should be restored to anticipating how revived populations might be overseen in the wild, Shapiro vividly explores the extraordinary cutting-edge science that is being used to resurrect the past. Considering de-extinction's practical benefits and ethical challenges, Shapiro argues that the overarching goal should be the revitalization and stabilization of contemporary ecosystems. Looking at the very real and compelling science behind an idea once seen as science fiction, How to Clone a Mammoth demonstrates how de-extinction will redefine conservation's future.

Beth Shapiro: Beth Shapiro is professor of ecology and evolutionary biology at the University of California, Santa Cruz. She received a MacArthur Award in 2009. Twitter @bonesandbugs.