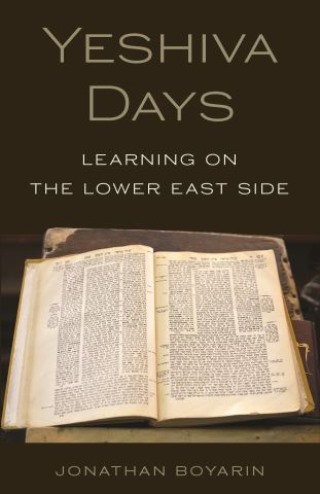 Learning on the Lower East Side

New York City's Lower East Side has witnessed a severe decline in its Jewish population in recent decades, yet every morning in the big room of the city's oldest yeshiva, students still gather to study the Talmud beneath the great arched windows facing out onto East Broadway. Yeshiva Days is Jonathan Boyarin's uniquely personal account of the year he spent as both student and observer at Mesivtha Tifereth Jerusalem, and a poignant chronicle of a side of Jewish life that outsiders rarely see.

Boyarin explores the yeshiva's relationship with the neighborhood, the city, and Jewish and American culture more broadly, and brings vividly to life its routines, rituals, and rhythms. He describes the compelling and often colorful personalities he encounters each day, and introduces readers to the Rosh Yeshiva, or Rebbi, the moral and intellectual head of the yeshiva. Boyarin reflects on the tantalizing meanings of "study for its own sake" in the intellectually vibrant world of traditional rabbinic learning, and records his fellow students' responses to his negotiation of the daily complexities of yeshiva life while he also conducts anthropological fieldwork.

A richly mature work by a writer of uncommon insight, wit, and honesty, Yeshiva Days is the story of a place on the Lower East Side with its own distinctive heritage and character, a meditation on the enduring power of Jewish tradition and learning, and a record of a different way of engaging with time and otherness.

Jonathan Boyarin: Jonathan Boyarin is the Diann G. and Thomas A. Mann Professor of Modern Jewish Studies at Cornell University. His books include Jewish Families, Mornings at the Stanton Street Shul: A Summer on the Lower East Side, and The Unconverted Self: Jews, Indians, and the Identity of Christian Europe.