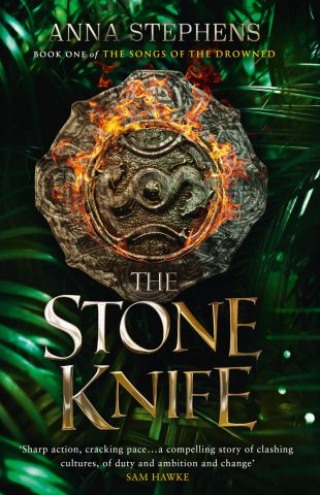 The Stone Knife (The Songs of the Drowned, Book 1)

A fantasy epic of freedom and empire, gods and monsters, love, loyalty, honour, and betrayal, from the acclaimed author of GODBLIND.

For generations, the forests of Ixachipan have echoed with the clash of weapons, as nation after nation has fallen to the Empire of Songs – and to the unending, magical music that binds its people together. Now, only two free tribes remain.

The Empire is not their only enemy. Monstrous, scaled predators lurk in rivers and streams, with a deadly music of their own.

As battle looms, fighters on both sides must decide how far they will go for their beliefs and for the ones they love – a veteran general seeks peace through war, a warrior and a shaman set out to understand their enemies, and an ambitious noble tries to bend ancient magic to her will.

Anna Stephens has worked in a variety of roles over the years, the latest being in marketing and communications for an international law firm. She’s currently living the dream as a full-time writer and hopes never to have to get a proper job again.

Anna loves all things speculative and horrifying, from books to film to TV, and is a second Dan black belt in Shotokan Karate, as well as a keen weightlifter and beginner swordfighter.