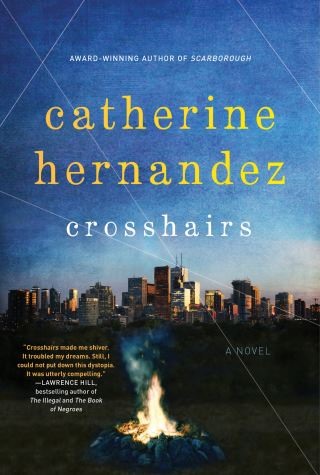 The author of the acclaimed novel Scarborough weaves an unforgettable and timely dystopian account of a near-future when a queer Black performer and his allies join forces against an oppressive regime that is rounding up those deemed “Other” in concentration camps.

In a terrifyingly familiar near-future, with massive floods that lead to rampant homelessness and devastation, a government-sanctioned regime called the Boots seizes the opportunity to force communities of colour, the disabled and the LGBTQ2S into labour camps in the city of Toronto.

In the shadows, a new hero emerges. After his livelihood and the love of his life are taken away, Kay joins the resistance alongside Bahadur, a transmasculine refugee, and Firuzeh, a headstrong social worker. Guiding them in the use of weapons and close-quarters combat is Beck, a rogue army officer who helps them plan an uprising at a major internationally televised event.

With her signature prose, described by Booklist as “raw yet beautiful, disturbing yet hopeful,” Catherine Hernandez creates a vision of the future that is all the more terrifying because it is very possible. A cautionary tale filled with fierce and vibrant characters, Crosshairs explores the universal desire to thrive, to love and to be loved as your true self.

CATHERINE HERNANDEZ is a proud queer woman of colour, a radical mother, a theatre practitioner, an award-winning author and the artistic director of b current performing arts. She is of Filipino, Spanish, Chinese and Indian heritage, and she is married into the Navajo Nation. Her novel Scarborough, which is soon to be a motion picture, won the Jim Wong-Chu Award for the unpublished manuscript; was a finalist for the Toronto Book Award, the Evergreen Forest of Reading Award, the Edmund White Award and the Trillium Book Award; and was longlisted for Canada Reads. She has also written the plays Singkil and Kilt Pins, as well as the children’s book M Is for Mustache: A Pride ABC Book. Crosshairs is her second novel. She lives in Toronto.