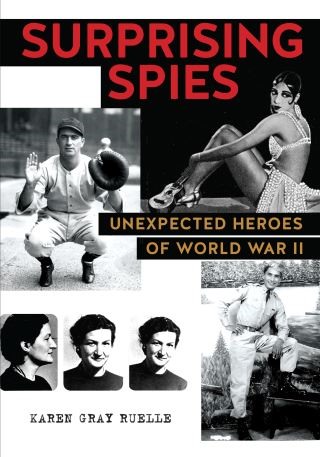 Would you spy for your country? Discover the World War II spies who lived among the shadows and the ones who lived in the limelight--disguised in plain sight!

Josephine Baker. Virginia Hall. Roy Hawthorne. These are but a few of the daring spies who risked it all to deliver and protect crucial intel for the Allied powers. From housing refugees and resistance members while extracting secrets from diplomats to developing a groundbreaking, war-changing code and keeping it top secret for over twenty years, the actions of these legendary World War II spies are unbelievable but true.

This thoroughly researched collection of biographies profiles several courageous individuals who resisted the Axis Powers via espionage and heroism. Includes numerous photos and features such fascinating accounts like that of Moe Berg, a major-league baseball player and potential assassin; Noor Inayat Khan, a Sufi princess and wireless operator; and Juan Pujol Garcia, a storyteller and double agent. Also features sections on invisible ink, ciphers and codes, resistance fighters, and infamous missions such as Operation Mincemeat.

Karen Gray Ruelle: Karen Gray Ruelle is a former librarian turned full-time author and illustrator of children's books. Her collaborations with Deborah Durland DeSaix, which include Peter's War, have garnered much acclaim; The Grand Mosque of Paris was named an ALA Notable Book, and Hidden on the Mountain, a Sydney Taylor Notable Book, received a starred review from Kirkus Reviews. Her books also include the Harry & Emily easy reader series, as well as other picture books and nonfiction. Ruelle lives in New York City.