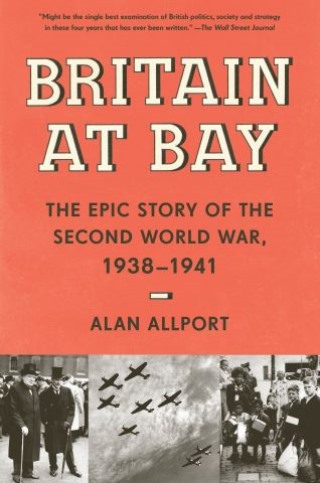 A sweeping, groundbreaking epic that combines military with social history, to illuminate the ways in which Great Britain and its people were permanently transformed by the Second World War.

Here is the many-faceted, world-historically significant story of Britain at war. In looking closely at the military and political dimensions of the conflict's first crucial years, Alan Allport tackles questions such as: Could the war have been avoided? Could it have been lost? Were the strategic decisions the rights ones? How well did the British organize and fight? How well did the British live up to their own values? What difference did the war make in the end to the fate of the nation?

In answering these and other essential questions he focuses on the human contingencies of the war, weighing directly at the roles of individuals and the outcomes determined by luck or chance. Moreover, he looks intimately at the changes in wartime British society and culture. Britain at Bay draws on a large cast of characters--from the leading statesmen and military commanders who made the decisions, to the ordinary men, women, and children who carried them out and lived through their consequences--in a comprehensible and compelling single history of forty-six million people. For better or worse, much of Britain today is ultimately the product of the experiences of 1938-1941.

Alan Allport: ALAN ALLPORT is a British-born historian, a fellow of the Royal Historical Society, who specializes in the British role in the Second World War. He received a Ph.D. from the University of Pennsylvania and is currently an associate professor of history in the Maxwell School of Citizenship and Public Affairs at Syracuse University. He is the author of Demobbed: Coming Home After the Second World War (2010), which won the Longman-History Today Book of the Year Award, and Browned Off and Bloody-Minded: The British Soldier Goes to War 1939-1945 (2015). He has also written for several publications, including, The Wall Street Journal, The Times (London), The Literary Review, and the London Review of Books. He lives in Syracuse, New York.