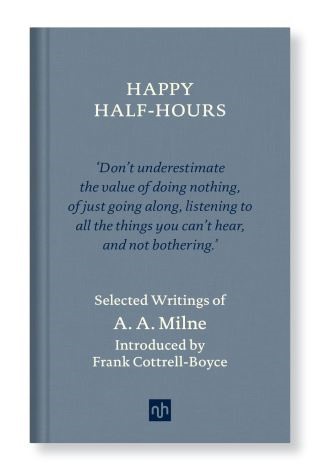 A delightful selection of articles by the ever-popular A. A. Milne, many of which haven't been in print for decades. Introduced by the prize-winning children's author Frank Cottrell Boyce, this volume brings Milne's brilliant non-fiction back to the spotlight.

A. A. Milne was a successful writer long before the classic Winnie-the-Pooh stories made him famous. Milne had a talent for regularly turning out a thousand whimsical words on lost hats and umbrellas, golf, married life, cheap cigars, and any amount of life’s little difficulties. This anthology, spanning four decades of Milne’s life, includes his fiercely argued writings on pacifism. Happy Half-Hours features the very best of A. A. Milne in one delightful volume.

“Milne’s gift to write amusingly about the most trivial things is a kind of blessing. The kind that can put you back together again when all else fails.” —Frank Cottrell-Boyce, from his introduction

A. A. Milne: A. A. Milne (1882–1956) was born in London in 1882. He was educated at Westminster School and studied mathematics at Trinity College, Cambridge. He was a regular contributor to Punch, and later assistant editor, before the interruption of active service in the First World War. A remarkably versatile writer, Milne went on to become a hugely successful and widely known playwright, both in the West End and on Broadway, as well as an essayist, poet, novelist and—most famously—children’s author, as the creator of Winnie-the-Pooh. He died in 1956 following a long illness.

Frank Cottrell-Boyce is a children’s novelist who won the Carnegie Medal for his first book Millions in 2004 and the Guardian Children’s Fiction Prize for The Unforgotten Coat in 2013. Millions was made into a film by Danny Boyle, for whom Frank went on to work as the writer on the London Olympics Opening Ceremony, 2012. His other books include Framed (filmed by the BBC), Cosmic, The Astounding Broccoli Boy and Runaway Robot. His films include 24 Hour Party People, God on Trial, Hilary and Jackie, and Goodbye Christopher Robin (2017), about the lives of A. A. Milne and his family.