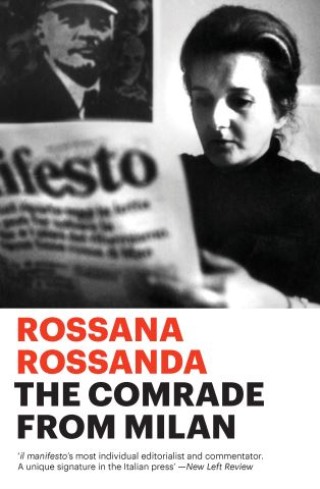 The Comrade from Milan

In this much-lauded memoir, acclaimed for its blend of literary elegance and political passion, Rossana Rossanda, a legendary figure on the Italian left, reflects on a life of radical commitment.

Active as a communist militant in the Italian Resistance against fascism during World War Two, Rossanda rose rapidly in its aftermath, becoming editor of the Communist Party weekly paper and a member of parliament. Initially a party loyalist, she was critical of the party&rsquo;s conservatism in the face of new radical movements and moved into opposition during the late 1960s. The breach widened after she and others publicly opposed the Soviet invasion of Czechoslovakia, and were expelled in 1969. She went on to help found the influential paper il manifesto, which remains the most critical daily in Berlusconi&rsquo;s Italy.

Her unique experience enables her to reconstruct that period with flair and authority. She paints a revealing picture of fascism, communism, post-war reconstruction and the revolts that shook Europe in the 1960s. In The Comrade from Milan, one of the most influential intellectuals of the European Left relives the storms of the twentieth century. Both cool-headed and precise, Rossanda provides a rare insight into what it once meant to be politically engaged.

Rossana Rossanda (1924–2020) was one of the founding editors of il manifesto. She was the author of several books, including L'anno degli studenti (The Students' Year), Appuntamenti di fine secolo (Issues at the End of the Century) with Pietro Ingrao and others, and Brigate Rosse: Una storia Italiana (The Red Brigades: An Italian History) with Mario Moretti and Carla Mosca.