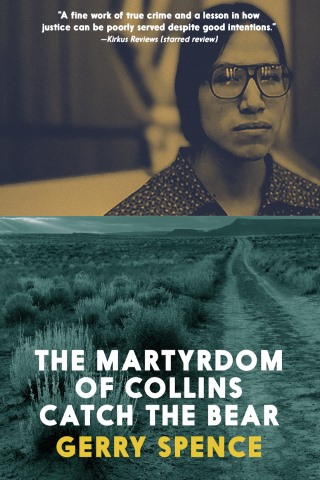 The Martyrdom of Collins Catch the Bear

The search for justice for a Lakota Sioux man wrongfully charged with murder, told here for the first time by his trial lawyer, Gerry Spence.

This is the untold story of Collins Catch the Bear, a Lakota Sioux, who was wrongfully charged with the murder of a white man in 1982 at Russell Means’s Yellow Thunder Camp, an AIM encampment in the Black Hills in South Dakota. Though Collins was innocent, he took the fall for the actual killer, a man placed in the camp with the intention of compromising the reputation of AIM. This story reveals the struggle of the American Indian people in their attempt to survive in a white world, on land that was stolen from them. We live with Collins and see the beauty that was his, but that was lost over the course of his short lifetime. Today justice still struggles to be heard, not only in this case but many like it in the American Indian nations.

Gerry Spence: Gerry Spence is legend among the trial bar, recognized to be one of the greatest trial lawyers of our times. His civil and criminal practices have gained him an international reputation for his high profile cases and record results. His trials have been celebrated in books and on television. Author of nineteen books, a poet, artist and photographer, Gerry Spence received the first Lifetime Achievement Award from the Consumer Attorneys of California. In 2009 he was inducted into the American Trial Lawyers Hall of Fame. In 2013 he received the Lifetime Achievement award presented by the American Association for Justice. He is the founder of the nonprofit Trial Lawyers College in Wyoming, founding member of The Spence Law Firm, LLC, and practices in Jackson Hole, Wyoming. Spence served as one of Collins Catch the Bear’s lawyers on the Yellow Thunder case.