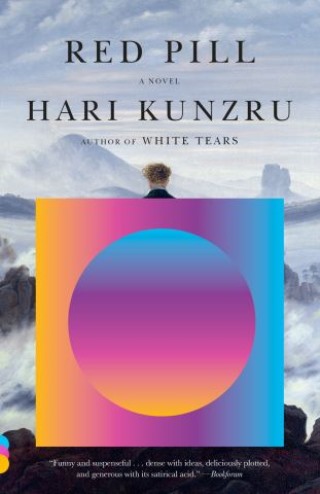 From the widely acclaimed author of White Tears, a bold new novel about searching for order in a world that frames madness as truth.

After receiving a prestigious writing fellowship in Germany, the narrator of Red Pill arrives in the Berlin suburb of Wannsee and struggles to accomplish anything at all. Instead of working on the book he has proposed to write, he takes long walks and binge-watches Blue Lives--a violent cop show that becomes weirdly compelling in its bleak, Darwinian view of life--and soon begins to wonder if his writing has any value at all.

Wannsee is a place full of ghosts: Across the lake, the narrator can see the villa where the Nazis planned the Final Solution, and in his walks he passes the grave of the Romantic writer Heinrich von Kleist, who killed himself after deciding that "no happiness was possible here on earth." When some friends drag him to a party where he meets Anton, the creator of Blue Lives, the narrator begins to believe that the two of them are involved in a cosmic battle, and that Anton is "red-pilling" his viewers--turning them toward an ugly, alt-rightish worldview--ultimately forcing the narrator to wonder if he is losing his mind.

Hari Kunzru: HARI KUNZRU is the author of five previous novels: White Tears, The Impressionist, Transmission, My Revolutions, and Gods Without Men. His work has been translated into twenty-one languages, and his short stories and journalism have appeared in many publications, including The New York Times, The Guardian, and The New Yorker. He is the recipient of fellowships from the Guggenheim Foundation, the New York Public Library, and the American Academy in Berlin. He lives in Brooklyn, New York.