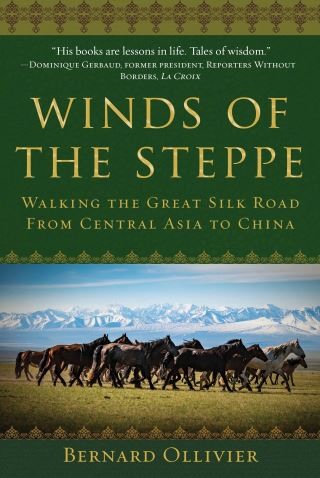 Winds of the Steppe

Walking the Great Silk Road from Central Asia to China

Bernard Ollivier pushes onward in his attempt to become the first person to walk the entire length of the Great Silk Road. “A gripping account. More than just a travel story—this is a quest for the Other.”—Alexis Liebaert, L’Événement

Picking up where Walking to Samarkand left off, Winds of the Steppe continues the astonishing tale of journalist Bernard Ollivier’s 7,200-mile walk from Turkey to China along the Silk Road, the longest and most mythical trade route of all time.

Taking readers from the snows of the Pamir Mountains to the backstreets of Kashgar—a Central Asian city that could be the setting for One Thousand and One Nights—to the Tian Shan Mountains to the endless Taklamakan and Gobi Deserts of China’s Xinjiang Uyghur Autonomous Region, Bernard Ollivier continues his epic foot journey along the Great Silk Road hoping to make his way to Han China and reach, at long last, the legendary city of Xi’an.

After traveling through a region dotted with former Buddhist shrines, Ollivier finds himself craving the warm welcome of Islamic lands, where, regardless of their culture or nationality, travelers are often treated as esteemed guests. Beyond the occasional vestige of the old Silk Road, Ollivier comes face to face with sites of religious significance, China’s Great Wall, and of course thousands of everyday people along the way.

As Ollivier tries to make sense of his journey and find connections between these people’s daily lives and the so-called “modern” world, he does so with a sense of humility that transforms his personal journey into a universal quest.

Bernard Ollivier: Career journalist turned traveler, Bernard Ollivier believes that walking has the power to transform. His publications include Out of Istanbul, Walking to Samarkand, numerous travel guides, both adult and young adult novels, and Life Begins at Sixty. In 2000, he founded the Seuil (“Threshold”) Association, helping troubled teens get back on track through walking. He lives in Normandy, France.

Dan Golembeski has worked as a French and Linguistics educator, a summer study abroad director in France, and has conducted fieldwork on language contact in Canada. An occasional, albeit fervent traveler, he increasingly crosses borders with words. In addition to Out of Istanbul and Walking to Samarkand he is currently translating a science-fiction novel. He lives in Petoskey, Michigan.