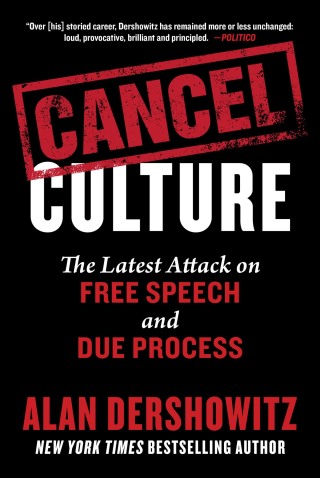 The Latest Attack on Free Speech and Due Process

In Cancel Culture, Alan Dershowitz—New York Times bestselling author and one of America’s most respected legal scholars—makes an argument for free speech, due process, and restraint against the often overeager impulse to completely cancel individuals and institutions at the ever-changing whims of social media-driven crowds.

Alan Dershowitz has been called “one of the most prominent and consistent defenders of civil liberties in America” by Politico and “the nation’s most peripatetic civil liberties lawyer and one of its most distinguished defenders of individual rights” by Newsweek. Yet he has come under intense criticism for his steadfast and consistent championing of those same principles, and his famed “shoe‑on‑the‑other‑foot test,” to those who have been “cancelled” for any number of faults, both real and imagined.

Cancel Culture is a defense of due process, free speech, and even-handedness in the application of judgment. It makes the case for restraint and care in decisions about whom and what to cancel, boycott, deplatform, and bar from public life, and offers recommendations for when, why, and to what degree these steps may be appropriate, as long as objective, fair-minded criteria can be determined and met. While Dershowitz argues against the worst excesses of cancel culture—the rush to judgment and the devastating results it can have on those who may be innocent, the power of social media to effect punishment without a thorough examination of evidence, the idea that historical events can be viewed through the same lens as actions in the present day—he also acknowledges that its defenders ostensibly try to use it to create meaningful, positive change, and notes that cancelling may itself be a constitutionally protected form of free speech.

In the end, Cancel Culture represents an icon in the defense of free speech and due process reckoning with the greatest challenge and threat to these rights since the rise of McCarthyism. It is essential reading for anyone interested in or concerned about cancel culture, its effects on our society, and its significance in a greater historical and political context.

Alan Dershowitz: Alan Dershowitz is one of the most celebrated lawyers in the world. He was the youngest full professor in Harvard Law School history, where he is now the Felix Frankfurter Professor of Law, Emeritus. The author of numerous bestselling books, from Chutzpah to Guilt by Accusation to The Case Against Impeaching Trump to The Best Defense to Reversal of Fortune (which was made into an Academy Award–winning film) to Defending Israel, Dershowitz has advised presidents and prime ministers and has represented many prominent men and women, half of them pro bono.