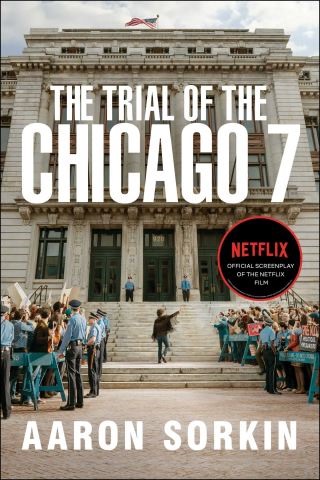 The Trial of the Chicago 7: The Screenplay

The brilliant screenplay of the Academy Award–nominated film The Trial of the Chicago 7 by Academy and Emmy Award–winning screenwriter and director Aaron Sorkin.

Sorkin’s film dramatizes the 1969 trial of seven prominent anti-Vietnam War activists in Chicago. Originally there were eight defendants, but one, Bobby Seale, was severed from the trial by Judge Julius Hoffman—after Hoffman had ordered Seale bound and gagged in court.

The defendants were a mix of counterculture revolutionaries such as Abbie Hoffman and Jerry Rubin, and political activists such as Tom Hayden, Rennie Davis, and David Dellinger, the last a longtime pacifist who was a generation older than the others. Their lawyers argued that the right to free speech was on trial, whether that speech concerned lifestyles or politics.

The Trial of the Chicago 7 stars Sacha Baron Cohen, Eddie Redmayne, Frank Langella, and Mark Rylance, among others, directed by Aaron Sorkin. This book is Sorkin’s screenplay, the first of his movie screenplays ever published.

Aaron Sorkin: Aaron Sorkin is a writer, producer, and director who has worked in film, television, and theater. He first gained attention for his play A Few Good Men, a major success on Broadway, which he later adapted into an acclaimed movie. He is the author of many screenplays including Malice, The American President, Charlie Wilson’s War, The Social Network (winner of an Academy Award for best-adapted screenplay), and Moneyball. His well-known work in television includes the highly acclaimed The West Wing, which won nine Emmy Awards in its first season alone, and The Newsroom. Sorkin made his directorial debut with Molly’s Game, which he adapted from a memoir by Molly Bloom (and which was nominated for an Academy Award for best-adapted screenplay). In 2018 Sorkin’s adaptation of Harper Lee’s classic To Kill a Mockingbird premiered on Broadway, and was nominated for nine Tony Awards.