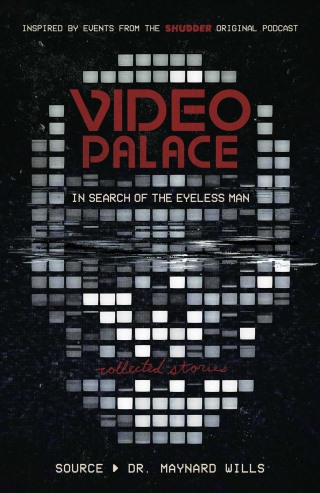 Video Palace: In Search of the Eyeless Man

A collection of chilling stories from the leading writers in horror and suspense exploring elusive urban legends.

In the popular podcast Video Palace, Mark Cambria, aided by his girlfriend Tamra Wulff, investigated the origins of a series of esoteric white videotapes. Cambria went missing in pursuit of these tapes, but not before hearing whispers of an ominous figure called the Eyeless Man.

Fascinated by the podcast and Cambria’s disappearance, Maynard Wills, PhD, a professor of folklore, embarks on his own investigation into the origins of the tapes and the Eyeless Man, who he believes has lurked in the dark corners of media culture and urban legends for at least seventy-five years. As part of his study, he has invited popular writers of horror and gothic fiction to share their own Eyeless Man stories, whether heard around the campfire or experienced themselves.

Get swept away in this thrilling and terrifying collection of tales—which can be read on its own or as a companion to the hit Shudder podcast—from contributors including:
-Bob DeRosa
-Meirav Devash and Eddie McNamara
-Owl Goingback
-Brea Grant
-Merrin J. McCormick
-Rebekah and David Ian McKendry
-Ben Rock
-John Skipp
-Graham Skipper
-Gordon B. White
-Tamra Wulff and Mary Phillips-Sandy

Maynard Wills: Dr. Maynard Wills is Associate Professor of Folklore at The New School in New York City. He’s spent years studying and publishing urban legends, both domestically and globally. He consults in the entertainment industry and frequently gives talks on popular myths. He’s had a career-long fascination with the entity he believes to be the Eyeless Man and was inspired by Shudder’s Video Palace podcast to publish aspects of his work for a mass audience. At the time of publication, Dr. Wills is missing.