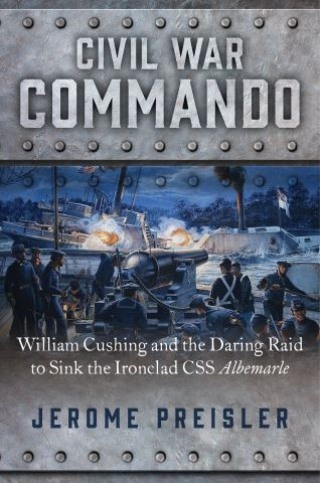 Here at last is an action-packed portrait of one of America’s greatest but little-remembered Civil War heroes, Commander William Barker Cushing, who sank the Confederate ironclad Albemarle in a spectacular mission in 1864.

Regarded as erratic and insubordinate, Midshipman Cushing was drummed out of the Naval Academy in March 1861. But with the outbreak of war, the Union needed every trained officer it could find— and whatever his flaws, Cushing was an extremely talented naval officer. Ferocious, uncompromising, courageous, and loyal, he became a U.S. Navy commando and at the age of twenty-one was sent to destroy the South’s ultimate naval weapon—the Albemarle, an unsinkable vessel with a devastating iron ram.

Here is that story, told with all the verve and drama it deserves, shining new light on one of the most important naval encounters of the war. Civil War Commando is a masterpiece of naval history that reads like a thriller and gives a neglected hero his due.

Jerome Preisler: JEROME PREISLER is a military historian, thriller writer, author of the bestselling NET FORCE series (co-created by Tom Clancy), and frequent lecturer on military topics at schools, museums, and bases around the country. A native of Brooklyn, he divides his time between New York City and Maine.