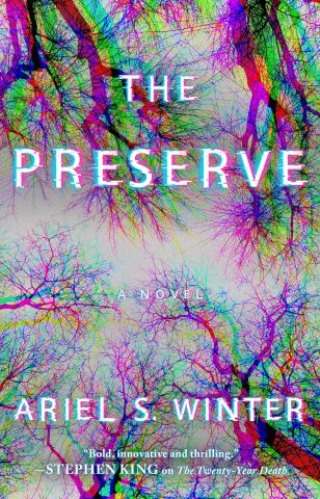 The critically acclaimed author of the “bold, innovating, and thrilling” (Stephen King) novel The Twenty-Year Death and the “brilliant” (Booklist, starred review) novel Barren Cove returns with a dark and compelling mystery set in the near future.

Decimated by plague, the human population is now a minority. Robots—complex AIs almost indistinguishable from humans—are the ruling majority. Nine months ago, in a controversial move, the robot government opened a series of preserves, designated areas where humans can choose to live without robot interference. Now the preserves face their first challenge: someone has been murdered.

Chief of Police Jesse Laughton on the SoCar Preserve is assigned to the case. He fears the factions that were opposed to the preserves will use the crime as evidence that the new system does not work. As he digs for information, robots in the outside world start turning up dead from bad drug-like programs that may have originated on SoCar land. And when Laughton learns his murder victim was a hacker who wrote drug-programs, it appears that the two cases might be linked. Soon, it’s clear that the entire preserve system is in danger of collapsing. Laughton’s former partner, a robot named Kir, arrives to assist on the case, and they soon uncover shocking secrets revealing that life on the preserve is not as peaceful as its human residents claim. But in order to protect humanity’s new way of life, Laughton must solve this murder before it’s too late.

The Preserve is a fresh and futuristic mystery that is perfect for fans of Westworld and Blade Runner.

Ariel S. Winter: Ariel S. Winter was a finalist for the Los Angeles Times Book Prize, the Shamus Award, and the Macavity Award for his novel The Twenty-Year Death. He is also the author of the children’s picture book One of a Kind, illustrated by David Hitch, and the blog We Too Were Children, Mr. Barrie. He lives in Baltimore.