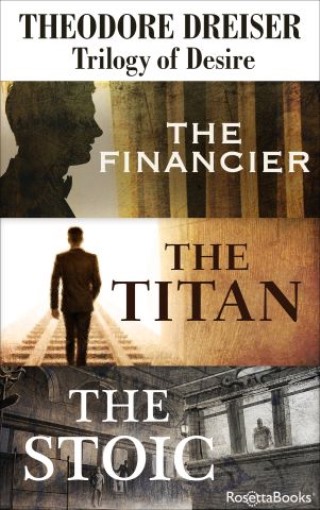 The Financier, The Titan, The Stoic

The saga of a Gilded Age mogul’s rise and fall, inspired by a real historical figure, from the author of An American Tragedy.

Inspired by the life of railway tycoon Charles Tyson Yerkes, these three novels weave a tale of American capitalism in the late nineteenth century. Included in this volume are:

The Financier: Ruthlessly ambitious businessman Frank Cowperwood finds his life derailed by the financial panic of 1873.

The Titan: Cowperwood leaves prison and heads to Chicago to regain his fortune—but his past follows close behind him.

The Stoic: In London, Cowperwood pursues the opportunity to make a fortune from a new underground railway system, while facing hard truths about the life he has lived and the fate that lies ahead.

Praise for the Trilogy of Desire

Theodore Dreiser:
The Indiana-born Dreiser (1871-1945) has never cut a dashing or romantic swath through American literature. He has no Pulitzer or Nobel Prize to signify his importance. Yet he remains for myriad reasons: his novels are often larger than life, rugged, and defy the norms of conventional morality and organized religion. They are unapologetic in their sexual candor--in fact, outrightly frank--and challenge even modern readers. The brooding force of Dreiser’ s writing casts a dark shadow across American letters. Here in &lt;i&gt;An American Tragedy&lt;/i&gt;, Dreiser shows us the flip side of The American Dream in a gathering storm that echoes with all of the power and force of Dostoevsky’ s &lt;i&gt;Crime and Punishment&lt;/i&gt;. Inspired by the writings of Balzac and the ideas of Spenser and Freud, Dreiser went on to become one of America’ s best naturalist writers. &lt;i&gt;An American Tragedy&lt;/i&gt; is testimony to the strength of Dreiser’ s work: it retains all of its original intensity and force.