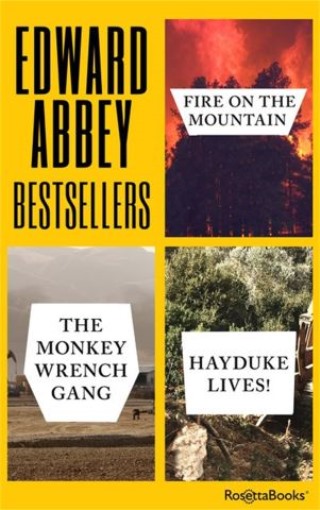 Fire on the Mountain, The Monkey Wrench Gang, Hayduke Lives!

Three wild and suspenseful novels about standing your ground against the forces of destruction by the author of Desert Solitaire.

From the beloved author and passionate advocate for the wilderness, these three novels follow some very memorable characters in their battles against strip miners, clear cutters, and government agencies destroying the environment:

Fire on the Mountain: A New Mexico man faces off against everyone from the Atomic Energy Commission to the U.S. Air Force in a battle to keep his land . . .

“One of the very best writers to deal with the American West.”—The Washington Post

The Monkey Wrench Gang: A motley crew of saboteurs wreak outrageous havoc on the corporations destroying the wilderness in this “wildly funny” tale (The Houston Chronicle).

Hayduke Lives!: George Washington Hayduke, ex-Green Beret, was last seen clinging to a rock face in the wilds of Utah as an armed posse hunted him down for his eco-radical crimes. Now he’s back, with a fiery need for vengeance . . .

“Abbey’s latter-day Luddites, introduced in his novel The Monkey Wrench Gang, are back—and not a moment too soon.” —The New York Times

Edward Abbey:
Edward Abbey was born in Home, Pennsylvania in 1927. In 1944, at the age of 17, Abbey set out to explore the American Southwest, bumming around the country by hitchhiking and hopping freight trains. It was during this time that Abbey developed a love of the desert, which would shape his life and his art for the next forty years. After a brief stint in the military, Abbey completed his education at the University of New Mexico and later, at the University of Edinburgh. He took employment as a park ranger and fire lookout at several different National Parks throughout his life, experiences from which he drew for his many books. Abbey died at his home in Oracle, Arizona in 1989.