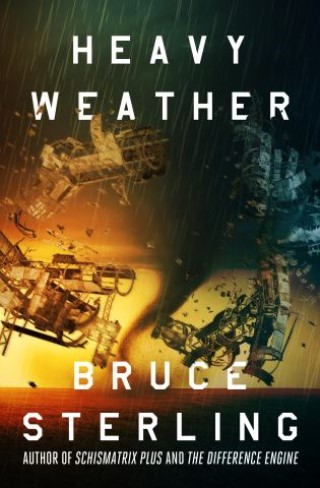 A near-future eco-thriller from the bestselling author of Schismatrix Plus and The Difference Engine.

The Storm Troupers are a group of weather hackers who roam the plains of Texas and Oklahoma, hopped up on adrenaline and technology. Utilizing virtual reality, flying robots, and all-terrain vehicles, they collect data on the extreme storms ravaging an America decimated by climate change. But even their visionary leader can’t predict the danger on the horizon when a volatile new member joins their ranks and faces a trial by fire: a massive tornado unlike any the world has seen before.

“A remarkable and individual sharpness of vision . . . Sterling hacks the future, and an elegant hack it is.” —Locus

“Lucid and tremendously entertaining. Sterling shows once more his skills in storytelling and technospeak. A cyberpunk winner.” —Kirkus Reviews

“So believable are the speculations that . . . one becomes convinced that the world must and will develop into what Sterling has predicted.” —Science Fiction Age

Bruce Sterling:
Bruce Sterling is an American author and one of the founders of the cyberpunk science fiction movement. He began writing in the 1970s; his first novel, Involution Ocean, about a whaling ship in an ocean of dust, is a science fictional pastiche of Herman Melville’s Moby-Dick. His other works, including his series of stories and a novel, Schismatrix, set in the Shaper/Mechanist universe, often deal with computer-based technologies and genetic engineering. His five short story collections and ten novels have earned several honors: a John W. Campbell Award, two Hugo Awards, a Hayakawa’s SF Magazine Reader’s Award, and an Arthur C. Clarke Award. Sterling has also worked as a critic and journalist, writing for Metropolis, Artforum, Icon, MIT Technology Review, Time, and Newsweek, as well as Interzone, Science Fiction Eye, Cheap Truth, and Cool Tools. He edits Beyond the Beyond, a blog hosted by Wired.

Sterling is also involved in the technology and design community. In 2003 his web-only art piece, Embrace the Decay, was commissioned by the Museum of Contemporary Art, Los Angeles, and became the most-visited piece in the museum’s digital gallery. He has taught classes in design at the Gerrit Reitveld Academie in Amsterdam, Centro in Mexico City, Fabrica in Treviso, Italy, and the Art Center College of Design in Los Angeles. Sterling lives in Austin, Texas; Belgrade, Serbia; and Turin, Italy.