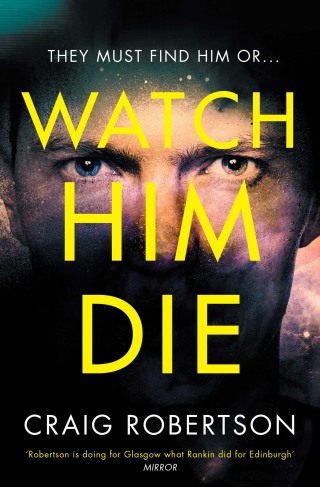 'Truly difficult to put down'

'Robertson is a master storyteller . . . never less than gripping’ Scotsman

'Devilishly clever . . . This might be his best yet'  SJI Holliday?, author of Violet

'Perfect for fans of Thirteen by Steve Cavanagh' Reader review

ONLY ONE PERSON CAN SAVE YOU. AND HE WANTS YOU DEAD.

Police find a man dead at his home in Los Angeles. Nothing suggests foul-play but elements of the victim’s house show that something is deeply wrong.

Meanwhile, in Glasgow, DI Rachel Narey is searching for a missing young woman – and the man she suspects of killing her.

When a feed broadcasting the slow and painful death of a final victim is discovered, these two cases become linked.

There’s no way to identify him.
No way to find him
No way to save him.
Not without the cooperation of a killer.

And the only way he will cooperate is if he can watch him die.

'Robertson does something bold with this one, adding a storyline set in America, and he pulls it off magnificently . . . The links to real murders from history, most notably The Black Dahlia case, are soon brought to the fore and the investigation’s relevance to Narey’s own search for a missing woman in Glasgow is made apparent via some skillful plotting' Spectator

‘A maestro of Tartan noir . . . High-concept plot keeps the 'tecs and the reader on their toes’ Sunday Times, Crime Club

‘Exceptionally talented . . . Robertson’s skill in matching the atmosphere of LA with that of Scotland is mightily impressive, as is his ability to maintain the suspense that lies at the heart of the search for a dying man. This is truly difficult to put down’ Daily Mail

'Robertson is a master storyteller – sensitive, realistic, terrifying and humorous – and Watch Him Die is never less than gripping’ The Scotsman

'Robertson’s latest criminal masterpiece . . . a thoroughly modern, breathless thriller that not only showcases the writer’s broad spectrum of talents. Plenty for fans to get on board with here and a fantastic introduction to one of Scotland’s premier crime writers’ Scottish Sun

Craig Robertson: Craig Robertson is a Sunday Times bestselling author, and his debut novel, Random, was shortlisted for the CWA New Blood Dagger. His most recent novel, Murderabilia was longlisted for the UK’s top crime fiction awards, including Theakston’s Old Peculier Crime Novel of the Year 2017 and the McIlvanney Prize 2017. During his twenty-year career with a Scottish Sunday newspaper, Craig Robertson interviewed three recent prime ministers and reported on major stories including 9/11, the Dunblane school massacre, the Omagh car bombing, and the disappearance of Madeleine McCann.