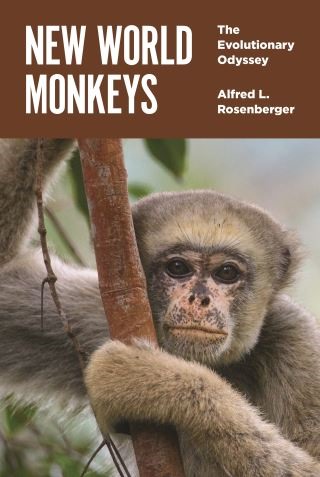 A comprehensive account of the origins, evolution, and behavior of South and Central American primates

New World Monkeys brings to life the beauty of evolution and biodiversity in action among South and Central American primates, who are now at risk. These tree-dwelling rainforest inhabitants display an unparalleled variety in size, shape, hands, feet, tails, brains, locomotion, feeding, social systems, forms of communication, and mating strategies. Primatologist Alfred Rosenberger, one of the foremost experts on these mammals, explains their fascinating adaptations and how they came about.

New World Monkeys provides a dramatic picture of the sixteen living genera of New World monkeys and a fossil record that shows that their ancestors have lived in the same ecological niches for up to 20 million years—only to now find themselves imperiled by the extinction crisis. Rosenberger also challenges the argument that these primates originally came to South America from Africa by floating across the Atlantic on a raft of vegetation some 45 million years ago. He explains that they are more likely to have crossed via a land bridge that once connected Western Europe and Canada at a time when many tropical mammals transferred between the northern continents.

Based on the most current findings, New World Monkeys offers the first synthesis of decades of fieldwork and laboratory and museum research conducted by hundreds of scientists.

Alfred L. Rosenberger: Alfred L. Rosenberger is professor emeritus of anthropology and archaeology at Brooklyn College and the City University of New York Graduate Center. His work has been published in Nature and in many other scientific journals and books.