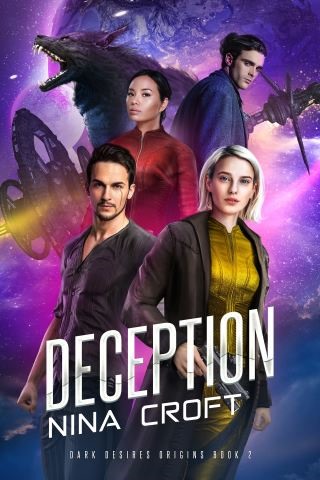 Warlock Milo Velazquez has always dreamed of a day when “monsters” like him don’t have to hide in the shadows. Now, on a planet far from Earth, he’s hoping the old prejudices have been left behind. Though from what he’s seen so far—not a chance.

Their new leader could make life a living hell for Milo and the other immortals illegally transported across the galaxy. Under cover, he scopes out the threat, but he never expected to find a beautiful woman locked in a cell underground. He should ignore her and focus on his mission, but instead he sets her free.

Milo has met all kinds, paranormal creatures and humans, in his centuries of life, but Destiny is like nothing he’s ever encountered before. She’s flawless, and strangely naïve, though she can spout off facts like a walking encyclopedia. He isn’t sure who—or what—she is, or why someone so innocent would be a prisoner.

All he knows is Destiny is different...and finding out why could be their only hope for survival.

Each book in the Dark Desires Origins series is STANDALONE:
* Malfunction
* Deception

Nina Croft grew up in the north of England. After training as an accountant, she spent four years working as a volunteer in Zambia, which left her with a love of the sun and a dislike of nine-to-five work. She's since then spent a number of years mixing travel (whenever possible) with work (whenever necessary), and has settled down to a life of writing and picking almonds on a remote farm in the mountains of southern Spain.

Nina writes all types of romance, often mixed with elements of the paranormal and science fiction.