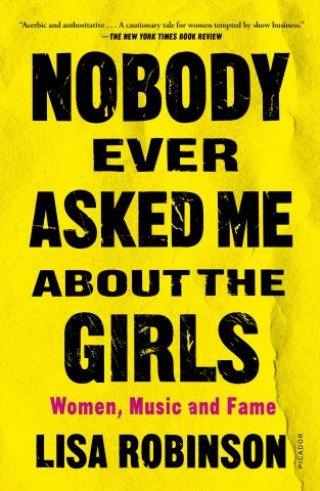 Nobody Ever Asked Me about the Girls

Over four decades, Lisa Robinson has made a name for herself as a celebrated journalist in a business long known for its boys’ club mentality. But to Robinson, the female performers who sat down with her, most often at the peak of their careers, were the true revelations.

Based on conversations with more than forty female artists, Nobody Ever Asked Me about the Girls is a behind-the-scenes glimpse into the effects of success on some of music’s most famous women. From Tina Turner, Joni Mitchell, Stevie Nicks, Donna Summer, Bette Midler, Alanis Morissette and Linda Ronstadt to Mary J. Blige, Lady Gaga, Jennifer Lopez, Adele, Beyoncé, Rihanna, and numerous others, Robinson reveals the private obsessions and public distractions that musicians contend with in their pursuit of stardom. From these interviews emerge candid portraits of how these women—regardless of genre or decade—deal with image, abuse, love, motherhood, family, sex, drugs, business, and age.

Complete with reflections from Robinson’s own career as a pioneering female music writer, Nobody Ever Asked Me about the Girls offers an overdue consideration of how hopes, dreams, and the drive for recognition have propelled our most beloved female musicians to take the stage and leave an undeniable, lasting musical mark on the world.

Lisa Robinson: For the past twenty years, Lisa Robinson has been a contributing editor at Vanity Fair, where she produced music issues and profiled many major musicians. Prior to that, she was a columnist for the New York Times syndicate and the New York Post, the American editor of England’s New Music Express, and the editor of several rock magazines. Additionally, she has hosted various cable TV and radio shows, and published a memoir, There Goes Gravity, in 2014. She was born in New York City, where she still resides.