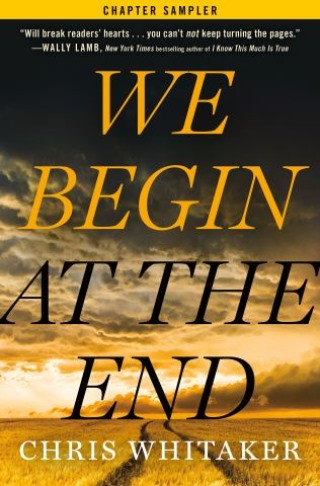 We Begin at the End: Chapter Sampler

Download a free excerpt from Chris Whitaker's We Begin at the End!

Right. Wrong. Life is lived somewhere in between.

Duchess Day Radley is a thirteen-year-old self-proclaimed outlaw. Rules are for other people. At school the other kids make fun of her—her clothes are torn, her hair a mess. But let them throw their sticks, because she’ll throw stones. Duchess might be a badass, but she’s really just trying to survive. She is the fierce protector of her five-year-old brother, Robin. She is the parent to her mother, Star, a single mom incapable of taking care of herself, let alone her two kids.

Walk has never left the coastal California town where he and Star grew up. He’s the chief of police, trying to keep Cape Haven, with its beautiful bluffs overlooking the sea, not only safe, but safe from becoming a cookie-cutter tourist destination for the rich. But he’s still trying to heal the old wound of having given the testimony that sent his best friend, Vincent King, to prison decades before. And he’s in overdrive protecting Duchess and her brother as their mother slides deeper into self-destruction.

Now, thirty years later, Vincent is being released. As soon as he steps one foot back into his childhood town, trouble arrives. It shows up on Walk’s and Duchess’s doorsteps, and they will be unable to do anything but usher it in, arms wide closed.

We Begin at the End looks at families—the ones we are born into and the ones we create. Duchess and Walk—and everyone they love and whose hearts they break, who deserve so much more than life serves them—will sear your heart in this extraordinary novel.

Chris Whitaker: Chris Whitaker lives in the United Kingdom with his wife and three young children. When not writing he works part-time at a local library, where he gets to surround himself with books.