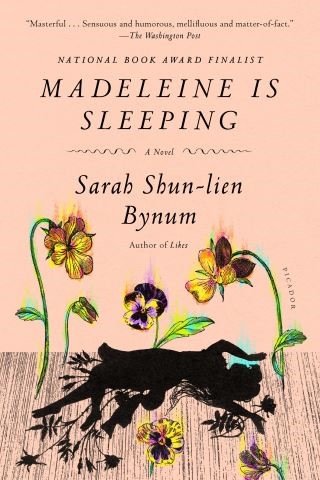 When a girl falls into a mysterious, impenetrable sleep, the borders between her provincial French village and the peculiar, beguiling realm of her dreams begin to disappear: A fat woman sprouts delicate wings and takes flight; a failed photographer stumbles into the role of pornographer; a beautiful young wife grows to resemble her husband's viol. Madeleine, the dreamer, travels in their midst, trying to make sense of her own metamorphosis. She leaves home, joins a gypsy circus, and falls into an unexpected triangle of desire and love.

Embracing the earthy and the ethereal, the comical and the poignant, Madeleine Is Sleeping is part fairy tale, part coming-of-age story, and above all, an adventure in the discovery of art, sexuality, community, and the self.

Sarah Shun-lien Bynum: Sarah Shun-lien Bynum is the author of the novels Ms. Hempel Chronicles, a finalist for the PEN/Faulkner Award; and Madeleine Is Sleeping, a finalist for the National Book Award and winner of the Janet Heidinger Kafka Prize. Her fiction has appeared in many magazines and anthologies, including the New Yorker, Ploughshares, Tin House, The Best American Short Stories, and the O. Henry Prize Stories. The recipient of a Whiting Writers’ Award and an NEA Fellowship, she was named one of “20 Under 40” fiction writers by the New Yorker. She lives in Los Angeles.