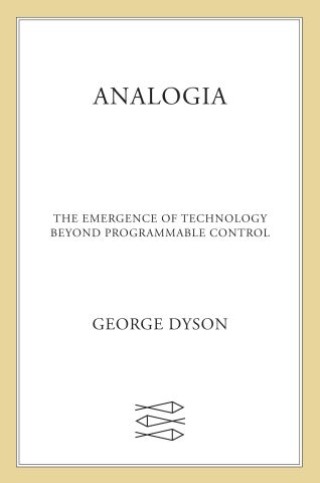 The Emergence of Technology Beyond Programmable Control

In Analogia, technology historian George Dyson presents a startling look back at the analog age and life before the digital revolution—and an unsettling vision of what comes next.

In 1716, the philosopher and mathematician Gottfried Wilhelm Leibniz spent eight days taking the cure with Peter the Great at Bad Pyrmont in Saxony, trying to persuade the tsar to launch a voyage of discovery from Russia to America and to adopt digital computing as the foundation for a remaking of life on earth. In two classic books, Darwin Among the Machines and Turing’s Cathedral, George Dyson chronicled the realization of the second of Leibniz’s visions. In Analogia, his pathbreaking new book, he brings the story full circle, starting with the Russian American expedition of 1741 and ending with the beyond-digital revolution that will complete
the transformation of the world.

Dyson enlists a startling cast of characters, from the time of Catherine the Great to the age of machine intelligence, and draws heavily on his own experiences at the Institute for Advanced Study in Princeton, New Jersey, and onward to the rain forest of the Northwest Coast. We are, Dyson reveals, entering a new epoch in human history, one driven by a generation of machines whose powers are no longer under programmable control.

George Dyson: George Dyson, a dual citizen of the United States and Canada, is an independent historian of technology whose subjects have included the development (and redevelopment) of the Aleut kayak (Baidarka, 1986), the evolution of artificial intelligence (Darwin Among the Machines, 1997), a path not taken into space (Project Orion, 2002), and the transition from numbers that mean things to numbers that do things in the aftermath of World War II (Turing’s Cathedral, 2012).